Nearly 70 companies ­have entered the fray since Mexico opened up its E&P market ­– among them Royal Dutch Shell, Petronas and Total.

Details of the bids, the key players involved and the implications for Pemex are contained in a new report that examines the early impact of Mexico’s energy reforms. The report is authored by Evaluate Energy, Sproule and the Daily Oil Bulletin. The report is available at this link

The biggest early mover is Shell. It has secured the most new blocks (11 to date) among international companies. Nine of these were awarded in Round 2.4, which was held in January 2018 and focused on deepwater areas. Shell dominated that particular round, securing four of its new blocks with solo bids, and partnering with Pemex and Qatar Petroleum on others. Later, in March, Shell also secured a shallow water block in Round 3.1 with Pemex. No single international company is dominant in the sector.

Malaysia’s Petronas ranks just behind Shell with nine blocks and has focused on deepwater assets too. European producers Repsol and Total have collected a number of both shallow and deepwater blocks, while Italy’s Eni and the U.K.’s Premier Oil are the most active international companies in Mexico’s shallow water areas with interests in five blocks apiece. 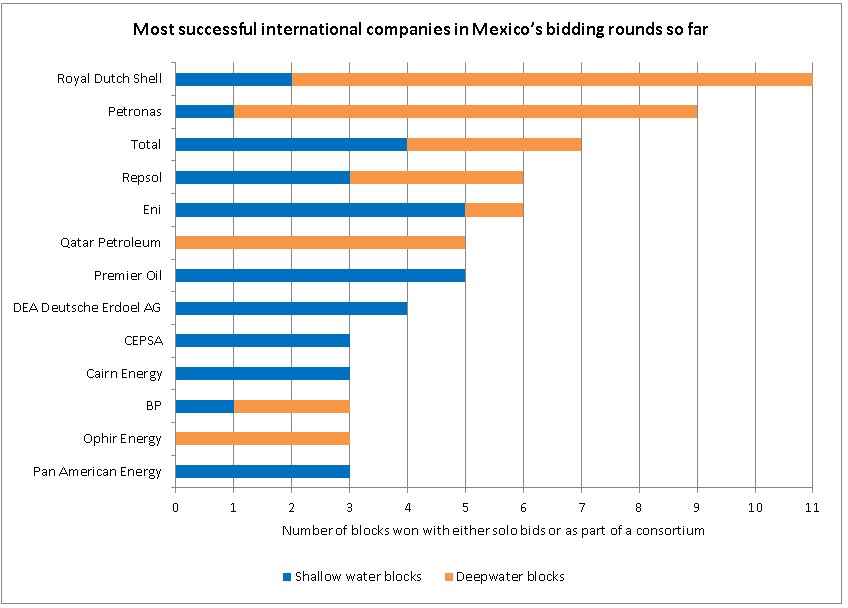